Our Lady Star of the Sea Church 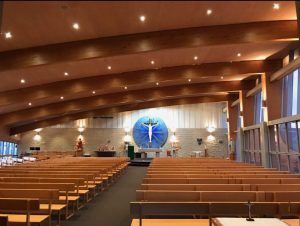 As the town expanded rapidly, after some years the much-loved church proved too small. Parking was also difficult.   The church was sold. Sunday Mass was located in the “tin shed” on the school grounds. The shed was hot in summer, flooded one winter and lacked atmosphere but it was also the spiritual home of the Ocean Grove Catholics. Buying and selling of surplus land eventually made possible a spacious new church in John Dory Drive. The wave design concept is credited to Karry Fleming. Architects: Toscano of Richmond. Builders: Lyons Construction, Geelong.